Over the (dry) river and through the (mesquite) woods... 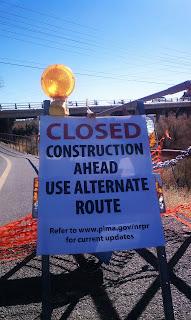 I wasn't trying to get to grandmother's house as my post title suggests, this was the story of my run today!  Instead of taking my normal route, when I saw this sign, I turned the other way, and, yes, ran into more construction in the opposite direction taking me through detours of parking lots and major intersections.  I did run through a mesquite forest and over some dry riverbeds as well.  While it wasn't a bad run - it was actually very good - I didn't have any idea how far I'd really gone until I pulled out my phone with a running app going and discovered I'd already gone almost 4 miles.  Since I'd only been planning on 6 or so, it was time to turn around.

My question... It's finally nice outside here.  I don't melt into the pavement when I step outside.  In fact, my run this morning was at (gasp) 10am and it was still coolish out.  Why oh why did the county decide that this would be a great time to do trail maintenance?  I looked at their website and parts of this trail are going to be under construction/maintenance through the end of February!!  Really people, July afternoons would have been a much better time!  It would have saved lots of money through not renting barricades because no sane person ventures out of air conditioning then.

Running the other direction, I noticed an office building and employees outside taking a break.  It got me wishing that I worked there - I could run on my lunch hour!  How cool would that be?  In my current job, there isn't time or an area to run, after all, the school playground is already crowded with adrenaline filled children, from which I need a break, so probably not my best option.  Too bad those employees were outside were smoking.  On the running path.  Really?  Is this necessary?

And, no construction diverted run would be complete unless I also had a music problem as well.  Internet based radio sounds like a great idea.  Maybe I should have tried it out sooner than while I was running?  It kept stopping due to mysterious error codes.  Though the 80's alternative station I was listening to was bringing back some fun music memories!  Daughter heard about this when I got home and promptly downloaded Pandora for me.  Hopefully it works much better!

Lessons learned: 1) Running new paths is good.  Time goes quickly and new routes challenge my mind.  2) Try out new technology before leaving the house.  Not while walking around the block to warm up.  No matter how easy it seems like it will be, it will have a couple of bugs to work out.

Looking forward to another long(er) run on Monday since I'm off for Civil Rights Day!
Posted by Amy at 12:39 PM