It used to be a good food day. Oatmeal with mango for breakfast. Yogurt and granola for a snack. Salad for lunch. Snack of cheese and crackers. A few raisins. Plans of black beans and chicken tacos for dinner. There wasn't one sign of a chocolate cake at work. Or brownies. Or cookies. Because, the people at work are awfully good cooks and love to share!

But, then... the mint chocolate Dilly Bar arrived.

I suppose this is why I ran this morning?
Posted by Amy at 2:03 PM No comments: 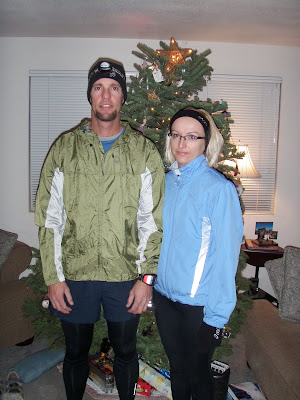 Yes, welcome 2010! My husband and I ran out of one year and into the new year. We had our very own racing event... the 1st & 2nd annual one - since you were supposed to participate on both 2009 and 2010! Donations to our favorite charities were encouraged. I picked Greg Mortensen's charity of Three Cups of Tea fame. All great fun runs need a cause to donate to right? Friends near and far participated. I didn't have to clean my house and make a lot of food to get ready! My husband and I set an alarm (yes, read OLD) and woke up off the couch just in time to get dressed and stumble out the door to run around our neighborhood in the minutes preceeding and right after midnight. First, I had no idea that so many people were out in our neighborhood at midnight (yes, here I am being old again... I alway hear the firecrackers shooting off from a groggy state on the couch), and second, it was fun running in the middle of the night. Not quite as peaceful as my early morning runs, but, none the less, it was neat being out to see what went on and all the goodwill and happiness that neighbors I didn't even know ever came out of their houses had for everyone. I'm already planning on doing it next year. Where ever you are or what ever you are doing for the minutes before and after midnight 2010/2011, I hope you get to join us!
Posted by Amy at 7:49 PM 2 comments: