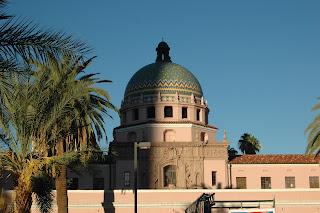 As the day began, my family found ourselves standing at the start line of the annual Get Moving Tucson 5K and 10 mile run.  The weather was crisp, fall weather, still shorts and t-shirts, but this is the desert we live in.  Any temperature below 80º is crisp and fall!  I was very thankful that it was a good twenty degrees cooler than at the same time last week when I was doing my final long training run. 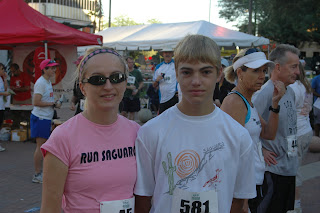 Son wasn't too happy to have his picture taken, but I know he was pretty excited to be there.  How?  He got out of bed *willingly*... which is a feat and a half if you take into account the attitude of a 13 year old boy!  He was also pretty excited that it wasn't 100º out, which seemed to be the case for almost every cross country race he was in this fall. 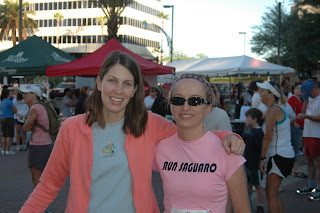 My friend Ann was also in town visiting this weekend, so, even though she wasn't sure about doing this event, she signed up at the last minute after her kids decided to get up at an insane, predawn time.  I'm even more impressed since she is pregnant, due in April, running on very little sleep, and still turned out to do the 5K.  I'm not sure I would have done the same. 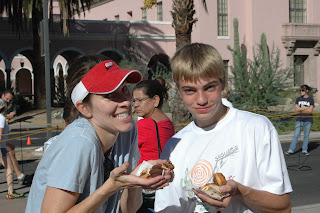 All runners started at the same time, but split off in different directions about a quarter mile into the race.  Philip was out like a bunny and finished in under 20 minutes.  He was 17th overall.  Pretty good for a field of about 400 people!  He was disappointed that they divided winning age groups into five year increments, except for the under 20 crowd, so, his time wasn't all that fast when you're running against college kids, but, if he had been in a normal under 14 age group, prizes would have been going his way!  As you can see from the picture, he and Ann finished in plenty of time to take advantage of the yummy treats at the finish line.  I was still out running.

My goal was to finish in under 1:30.  I did 1:29:11.  Yay for me!  I was exact middle of the pact, eleventh in my age group, nothing special.  It was lots of fun being on a new run though.  We went through lots of warehouse type districts just south of downtown.  I saw some funky brick walls that it would be fun to take photos of my kids in front of someday.  I figured out what the Basket Bridge is after having heard about it for years.  Not only did I run under it, I ran over it as well!  Then, I looked up at one point when I got to the part of the run that was at the turn around of an out and back, and downtown looked SO far away.  It didn't help that my left butt cheek was sore.  Not horribly, but I could feel it with every step I took.  That and I drank too much water before the race and needed a porta potty.  By about mile 7, I had succumbed to the fact that porta pottys were not going to materialize at any point in the last 3 miles, my bum was going to be sore no matter what I did, so I just sucked it up and enjoyed the view and running in the middle of a normally busy street.  Would I do it all again?  Yes... just hopefully this next time I would be smart enough to empty my bladder before I began.  I'll let you know about the bottom soreness... it still is today.
Special thanks to Daughter who came and took pictures and watched Ann's kids while we were off running to fame and glory... or at least some well deserved pastries!
Posted by Amy at 8:07 PM 2 comments:

Race day is almost upon us!

I did take Son to go pick up our bib numbers and shirts today.  Son decided that he would buy some new running socks while we were at the Running Shop today.  I think they look like a fun thing to wear in a race.  I hope he does well! (I hope I finish! GULP!)
Posted by Amy at 8:40 PM No comments:

Will have someone running along next to me carrying this.  And if it happens to be next to a beach, all the better!  I got started later than I planned yesterday and it was hot.  Summer hot.  It wasn't so bad when there was shade, but that full force sun was killing me.  Did I mention it was only 8am?  I did manage to get in 9.7 miles (the 10 miler is in a week!), but those last few miles were laced with hallucinations of popcicles, ice cold sodas, and Icees.  I got home to none of that (not even any cold water in the fridge!), so I found some frozen cherries in the freezer.  Heaven.  It was better for me in the long run than the items in my dreams!

﻿ ﻿
This has certainly been the week of me seeing cute shirts I want.  My bank account would really be suffering if I had ordered all of them at this point!  So, yes, I am back to tell you about *more* cute shirts.  If you have been getting them all, know that I am really jealous and want to come raid your closet.  I came across Running Chics today... and I really think this belongs in my fall wardrobe.  I would love to have one so much that I even found a blog giveaway for one.  Crossing my fingers that I win!
﻿﻿
And, October is off to a great start with 4 sluggish miles run this morning.  Yes, they were horribly sluggish.  I won't even tell you what my pace was.  I prefer to call it "slogging". I then went off and found an 83 mile challenge to do for October.  Only 79 miles left! (It had better cool down LOTS soon!  It was 103ºF yesterday!).  Happy Friday and have a happy running weekend as well!
Posted by Amy at 3:38 PM No comments: