I've been out of town for the past week.  My family went to Channel Islands National Park for some backpacking/camping adventures.  We then spent a couple of days in Ventura, CA before heading home.  Those two mornings we woke up in a hotel room instead of a tent, I had great intentions of getting up and running in the cool sea air.  Laziness set it and it didn't happen.  Now here I am back home and I just got home from my first run in over a week.  It was horribly hot and humid.  I take back all of my favorite reasons to run it summer and claim they are only true in June before the humidity kicks in.  It was 90 degrees when I was out this morning (6am) and really felt like I was stiffer than a board.  It wasn't a great run... but at least it was a run, especially since I am now off to church girl's camp for a week as a leader, and I don't see a lot of running going on there.
Posted by Amy at 7:35 AM No comments:

For me at least!  I joined a gym.  I had been wanting a place to swim since last summer.  I learned how to swim "for reals" last summer and now have delusions of someday doing a tri.  Right after my marathon I suppose! ;)  But, as for swimming, I'm not fast at all... it takes me about an hour to do 20 laps.. seriously, it's embarrasing!  But, I do enjoy it and think it would be great cross training in addition to running.  My only problem was finding a pool that was open year round and didn't have high school swim team practice right when I actually could go as seemed to be the case with every pool near here.  My supportive husband finally decided enough was enough and called around and even took me around for the Local Tour of the Gyms.  Actually, I think he just has his own delusions of me looking like Kelly Ripa or someone!  No one told him besides a gym, she also has a nanny, a cook, and a driver, not to mention a maid and a laundress!

I decided that I need to get my money's worth out of this membership and went on Monday afternoon.  Only to find out that Aqua Fitness class was going on.  OK.  Note to self, check class schedule before you leave the house.  I was wearing flip flops (I'm seeing a trend of not enough planning here!) and so I rode the stationary bike and did a few of the machines for my abs.  It made me tired enough!

Today I was out to try to swim again.  Look at class schedule (which is now hanging on my fridge).  Hey, there's a spin class in 20 minutes, maybe I should go?  Throw stuff in bag, including bike shoes, towels, goggles, socks, water... I feel like I'm packing for an expedition!  Go to gym with 10 min to spare before the spin class.  Only to look inside and every single bike is taken.  Hello people.  It's 9:15 on a Wednesday morning.  Don't you guys have to be at work or something?  And how come when I was over here on Monday and saw a class going on only half of the bikes are filled?  Plan B.  Go ride stationary bike again.  This time, I programmed a hill workout.  Yes, it was difficult, but good.  I finished and decided to do a couple of the ab machines again... ouch!  I had no idea how much my middle section hurt until I tried to do a crunch type move.  I guess I did do something on Monday!  I did make my way to the pool after all of this as well.  The water felt divine after the sweat I had worked off on the bike.  Maybe I should have stayed and ran on the treadmill to give me my own mini tri feeling?  Nah.  I really don't love treadmills and would much rather be outside to run.

I think this gym thing could work out.  I just need to figure out a schedule for it and get a plan together.  I feel guilty about it for serveral reasons already.  One, it costs money.  Two, my husband doesn't get to go and I know he would enjoy it. Three, time away from home/kids/stuff I should be doing.

I'm sure once I've been there a few times I'll have all the bugs worked out and not have a sore middle anymore as well.  I'm hoping all this extra work makes me a stronger runner as well.
Posted by Amy at 11:42 AM No comments:

I had great plans to go back to the "hill" and run this morning.  Somehow it didn't happen.  I guess I turned off my alarm and rolled over, and by the time I realized it, it really was too late to get up and over there before it got horribly hot.  So, instead I went for a run along my favorite "river" walk, but making myself go a longer distance than I had planned because I didn't go to the "hill".

I was running along, cursing the fact that I ever came up with a "Why I Love Summer" list since it was so humid and hot that even at this early time in the day I was about to become a grease spot on the asphalt.  Really, I kept wondering what was touching my arm only to realize it was sweat pouring off myself and running down my arms.  Yuck.  I think I really should have come up with the "Why I Need to Move Someplace Else in the Summer" list!  This might also explain the fact that the riverwalk was almost empty today.  People were smart enough to stay inside! 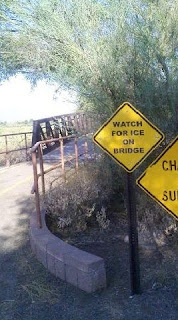 Then I saw this sign.  I had to stop and take a picture of it.  Some poor county worker must have never got around to covering it up for the summer.  Acutally, this sign has not been needed since February I think.  We really only get a handful of days per year that this sign is even useful.  Certainly not today!  I had to giggle.
At least there was a cool plus to my run today though - a coyote ran across the walk down into the riverbed... followed by a baby coyote!  I see coyotes on occasion, but never their babies!  I hope they were looking for cooler places to spend the day!
I know I am!
Posted by Amy at 11:06 AM No comments: