I had to share this...some days... this would be me... but... no matter how much I try to convince myself, I'm always happier after I do the run!

I was syncing my Garmin to my computer this morning and it uploaded the run I did a week ago Wednesday.  I loved seeing this run because I did it while in Durango, CO and it was a different map on my screen.  It put me back in vacation mode.  Even though I had to get up earlier than normal to run (different time zone), run a shorter distance than normal (didn't want to interrupt our family vacation plans), and run without socks (they were sitting in the drawer at home... 500 miles away)... it was more than worth it to run.  For one, I got to run on a riverwalk that... gasp... had a river running right next to it.  Unlike my riverwalk that has a dry riverbed right next to it.  I also felt pretty good about this run because I live/train at 2700ft above sea level.  Durango is 6500ft above sea level.  Yes, there was some pushing myself along the way and it was a bit harder to suck in air, but I did it and at a really reasonable pace.  If I lived there I would like to think it wouldn't be too hard to acclimate.

The long and the short of it... if you get the chance - run when you are in a different setting.  It motivates you and gets you out of ruts.  It may be hard, but it is always worth it!

If you're joining in for Fitness Friday - welcome!
Posted by Amy at 8:22 AM 6 comments:

We all know how important eating is... especially for the runner.  We all try and make sure we eat less sugar, more water, just the right amounts of fat, protein, and there are others of us who venture into vegetarian/vegan territory trying to find just the right fueling process for our bodies.  I personally am trying to eat a more plant based diet, but haven't been able to completely give up meat yet.

Over the past few years, I've turned into somewhat of a food nazi amature nutritionist.  My kids appreciate me... sometimes.  My cute husband tolerates me.  I think they all wish I'd just give in and go for a big bowl of ice cream and brownies at every meal.  As the main course.

I came across this article this morning and found it pretty interesting.  In my marathon training so far, I've been trying to be conscious about what I eat and have even started making sure that the training products I've been using are organic or natural... to the best extent I can.

After reading this article, what are your thoughts of products that you use for training?  I would love to be able to carry around a banana or a sandwich, but I just don't see being able to carry it well or eat it while running.

I'm leaving you with a couple of photos from our trip to southwestern Colorado... my cute husband, son, and I did a 40 mile backpacking trip... over 4 days with 3 12,000ft passes involved!  Yay for cross training (and fyi, I didn't leave daughter behind on purpose, she's living at a university summer program right now).  Now it's over and today is back to work day for me! 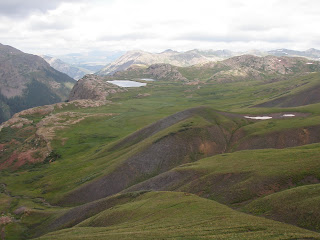 My Fourth of July 5K

As the Fourth of July was rolling around this year, it occurred to me that I would get to run the 2nd Annual Mouthy Kid Race Up the Hill... better known as Amy and her son race up Tumamoc Hill because last year he said he was going to beat her without even trying.  You can read last year's report here.  I was quite shocked to say the least when I mentioned this to him and he didn't argue, moan, or complain.  He just agreed to it.  Though I am trying to forget the fact that a couple of hours later he texted me trying to get out of it by claiming "laziness".  In the end, he decided to go.

I also decided that since this run is a perfect 5K, I'd do the It's My Birthday and I'll Run If I Want 5K put on by Livin the Fit Life,  It won't be my fastest time ever, but, I will get it done... and start running this darn hill again... I've been avoiding it for some reason, but really need to get back on the bandwagon with it as I signed up for my annual Labor Day race that involves killer hills.

The best part of doing this race was the weather... 70ºF and overcast!  A dream in Tucson in July.  In fact, I read yesterday that the 4th of July here was the coolest on record since they started keeping records way back in 1895.  I loved it!  I'm still trying to figure out how to move someplace else for June, July, and August.

My son cracked me up - he ran up the hill without a hitch, just as I guessed that he would and when I got to the top, I found him in this zen-like pose acting like he had been there for months waiting for me...
﻿﻿﻿﻿﻿﻿﻿﻿﻿﻿﻿﻿﻿﻿ 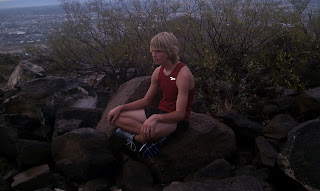 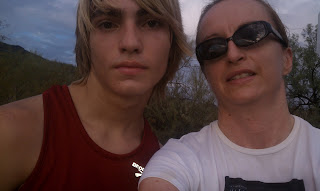 At least he was nice enough to wait for me and decided to run down with me.  At the bottom we tried to take a picture, but in his words, we FAIL at taking self portraits!  This was the best one... *trust me* on this!  I am only showing this one to document the event.

If you're joining me for Fitness Friday, welcome!  Thanks to Jill for hosting!﻿﻿
Posted by Amy at 9:11 AM 5 comments:

A Thought for a Tuesday...

I am here to report that it doesn't get any easier.  The getting up early to run.  I might get less bad better at running, but getting myself out of bed is something I have to just force myself to do.  Looking at me, you might think I have this great habit going on.  The truth is, I have this great internal battle going on.

I've been getting up early to run for something like 6 (wow!) years, and, while I am grateful that I do it this way, there are a lot of mornings my brain is screaming "NOOOOOOO!!!!!" like a tired two year old.

I am always glad that I did get up early afterwards because if I didn't kids, work, and the heat would all be my excuses.  And I really like that feeling of being up and doing something before anyone else is up.  I've never regretted getting up early even once.

Why does my brain have to be so obstinate?