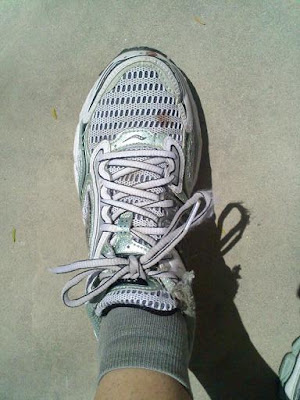 I am writing to tell you how much I like your bandaids, especially the large, knee sized ones. I have used your product on my children for years. Your bandaids have covered their cuts and scrapes, both real and imagined. They even loved to wear them as badges of honor even when they really didn't have a cut, but it made them feel better anyway. In the past couple months though, I have come to appreciate them myself. For instance, the month of February saw me using a very large amount of them due to the knee injury I incurred while trail running. They covered my wounds and kept other infections out.

Unfortunately for me (I guess not so much for you), I had to get the large knee sized bandaids out again as I tripped and fell in the last two steps of my run while trying to hit the "walk" button at the intersection so I could cross and go home (yes, no one stopped as this did happen in front of a bar and I'm sure the passing drivers thought I had just had one too many!). This was not nearly as serious and my last fall, and only resulted in a skinned knee and elbow, but it was very embarrassing to have to tell my friends and colleagues, so it was nice to be able to hide the scrape under one of your bandaids. I even went and ran the next day with one of your bandaids attached to my knee just to prove I am not a complete klutz. The good news is that it stayed on for the whole 4.7 miles. Maybe you should start advertising in issues of Trail Runner magazine?

Thanks again for a great product!

P.S. I have since run six times and not fallen once.!

P.P.S. I have enclosed the picture of my shoe with two large drops of blood on it as I didn't think you probably wanted to see what my knee looks like!
Posted by Amy at 9:08 AM No comments:

Out for my 5am run. I'm on a schedule you know! I need to get back by 6am so that I can make sure Daughter is out the door at 6:30am with a full stomach and knowing her mom cares. And all the other morning things that have to do with getting yourself ready for wor and another kid up. I am out running.... it's getting lighter out every morning the last couple of weeks. I am having a hard time knowing what time it is. Clock? Watch? Nah. I have a phone with me, but who wants make the effort to look? It's already hard enough being out here.

My neighborhood can be run in two kinds of circles. A big one and a small one. I feel like a mouse on a wheel some mornings. Four miles equals 5 little laps and 2 big laps. I keep count on my fingers. This morning, it's a little warmer as well. I ran for a bit with my jacket on, but left it in my driveway on lap 2... or was it 3? I didn't move my fingers for the count on that lap? Or did I? Oh well... I'm sure I have only run 2 laps - there's no way I would have kept the jacket on for 3 laps.

Back home. Done. Clock says 6:07 and Daughter is wondering why I am late. It must have been 3 laps after all when I ditched the jacket.

Unknowingly I have added a 1/2 mile to my weekly log without trying! Too bad I'm a bit behind now in the rat race this morning!
Posted by Amy at 9:22 AM No comments:

One of the things I do when I run is listen to podcasts. I don't do it any other time, just when I run... just for that extra motivation! One of my favorite podcasts is the Nutrition Diva - she always gives you food for thought (haha!) and sometimes a challenge or two. A few podcasts ago, she was talking diet. Somehow the challenge of skipping sugar for a month came up. It seemed like a novel idea. I didn't think too much about it until my husband (who is a listener as well) brought it up. So, we decided to go for it. I'm not talking reading every label out there, but just avoiding those things that are obvious sugar sources... like the cinnamon rolls and jelly beans from Easter that have invaded my house.

And, I get one cheat day. Only because my birthday is this month and I am asking for a trip to the new Cheesecake Factory that has opened near my house. Other than that, I can just skip it all! I want to see if avoiding the sugar helps me a) lose any extra weight (mostly belly fat) and b) makes me feel any better or go any faster while running.

Day one was today and I've just about made it through. I need to give my son this bag of jelly beans that has been taunting me all afternoon as I've been working in the kitchen. I'm sure he will make quick work of it! What kind of mom am I? Giving my son a half full bag of jelly beans to gorge on???!!!
Posted by Amy at 4:37 PM No comments: 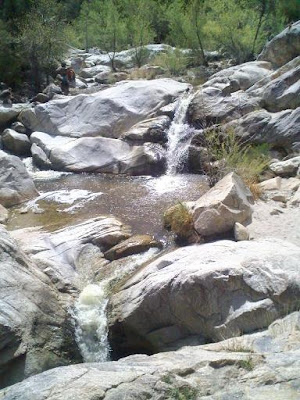 Well, here I am. At the tail end of the week I had been looking forward to. The week that everyone who works in the school system looks forward to starting the day we return from Winter Vacation. Spring Break. I had planned to run everyday. After all, here in the desert, it is spring! Warm days, cool nights, the smell of citrus flowers in the breeze. This is one of the reasons I stay here (she says as she is trying to block the images of 110 degree July days where it's a race to get the milk home before it curdles and your lungs protest at the thought of running in such horrid conditions.). I had visions of popping up every morning as soon as the sun rose and going out to do a few miles, coming home refreshed and off to conquer all of my other spring break projects like carpet cleaning, closet organizing, and small craft project finishing.

What really happened?
Not the running adventures I had planned, that's for sure! It is Thursday evening and I have run a total of ONE time since Sunday. Once. Really. Once!!! Yes, I have excuses plenty... Monday I went on a hike (do you like the picture I took while on it?)... Wednesday I thought I had too much to do (like the emergency dog food excursion, taking Son to track practice, and house vacumming)... today it was supposed to rain (but it didn't - it was just cooler weather and looked nasty). I have even managed to ignore this blog for longer than I had planned.
So, I have really two days left of my spring break (Sunday doesn't count - it's Easter)... I am resolving to make the best of it and run both days. It's not that I don't want to... I'm just lazy. I guess I had Spring Fever during Spring Break.
Oh yeah. And the carpet isn't clean either.
Posted by Amy at 6:10 PM No comments: