I have a hard time getting up to run in the middle of the week.  Monday is great because I'm pretty well rested and relaxed from the weekend.  Friday is great because there is spring in my step knowing that I just have to coast through the day, and the weekend is mine.  Wednesday and Thursday mornings I have issues with.  Especially when it's cold and dark. The bed seems to have giant magnets under it pulling me back in. 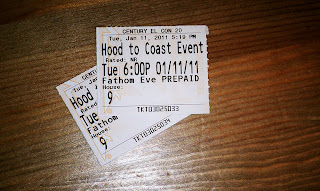 This week my Midweek Motivation came in the form of going with Husband to a movie.  Hood to Coast was a movie I had gotten a few emails about and it piqued my curiousity.  It seems like I had heard of the race, but couldn't remember if I had paid much attention.  I managed to get kid driving around duty covered for the evening, dinner cooked early, and we were off!

It was a one night premiere of the movie.  They spent some time going "live" showing the "stars" of the movie arriving and spoke with a few of them.  I really think they could have skipped that because I didn't know any of these people, and only learned who they were by watching the show.

I was pretty interested in the story of how this relay unfolds.  From the team that was pretty much untrained and joked their way through the race to the elites that showed up and were organized down to the very last shoelace, I thought the filmmakers did a good job of taking us step by step through the race.  In fact, it made me want to run from my chair and sign up for the next Hood to Coast.  But I can't... I just checked the Hood to Coast website and found out that I should have signed up back in October!

For the record, doing a relay like this sounds like a lot of fun.  I know there is a Ragnar in my state, if I had eleven more people that were willing to get it off the ground, I would be there!  I haven't stayed up all night since, well, college?  Or was it the baby with chicken pox?  More likely the second one.

That thought got me up on Wednesday morning to go put in some miles in the dark!
Posted by Amy at 5:57 AM