This is one of those races that's fun to do - think jingle bells and Santa hats -  but about 40 minutes on the freeway from my house, so I am always on the fence as to whether or not to do it.  My son said he wanted to... so that was what pushed me over the edge and we signed up!

It was windy.  Not just a little breezy, but what felt like gale force winds.  The weather was forecast as rainy in the afternoon, so I'm sure this wind was just bringing in the clouds, but it sure made for a yucky day.  They also handed out jingle bells to tie to your shoes.  I did.  Son was way too cool to. 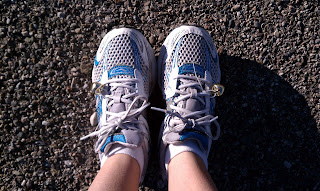 We did this race for the first time last year.  It's at a high school and run on their cross country course.  I almost got lost last year.  It sounds dumb, but it's true.  I heard other people have the same complaint.  This year, the course was so well marked that you would have had to run with your eyes closed to have gotten off course.  What was odd this year is that the mile markers were missing.  Finally at one point I thought to myself that surely I had gone more than a mile!  I had.  I was almost to the finish line!  That will teach me to forget my watch at home.
In the end, Son did great - he came in 4th in his age group and 13th overall.  I came in 30th overall and 1st in my age group.  My time wasn't stellar, but, considering I haven't run much in the last couple of weeks (dumb cough), I was fairly pleased. 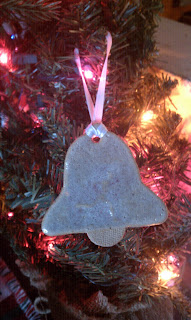 I took home an ornament made by a class at the school.  I now have two.  Maybe I should get a tree and dedicate it to running ornaments?

Do you do any Holiday related races - just for the fun of it?
Posted by Amy at 7:27 AM