Our church sponsored a Turkey Trot 5K the weekend before Thanksgiving.  Son and I decided that we were going to do it as a warm up to our official Turkey Trot that we would later be doing on Thanksgiving day.

It was a beautiful day for a run.  It was at a small park and the participants got to run along the running/bike path.  It was a small run as well.  There were a variety of events taking place in town that weekend, inlcuding the end of many soccer seasons and a very large bicycle event in which people from all over the world come to see and participate in.  So, there were only about 35 people total who participated in the run.  Which might be why I came in first overall in the womens and first in my age group!  Son came in first in his as well, though he was quite disappointed in the results since he had been a lot faster at the run in October.  That's what will happen when you don't run for a month Son.  Some lessons are harder to learn than others!

It was the first, and probably the only time ever, that I was told by someone that I was fast.  And the person had a straight face as well!  For the record, I did PR with a time of 24:12. 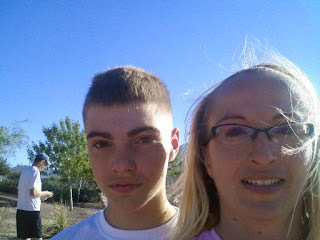 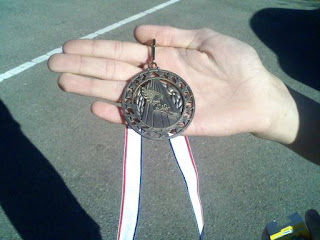 We didn't have anyone to take pictures for us and I didn't want to explain the quirky phone on my cell phone to anyone, so here were are in our self portrait to document the moment!
Posted by Amy at 6:56 AM