I mentioned on Friday that I had won an entry into the Sisterhood of the Shrinking Jeans Virtual 10K.  It was supposed to be run yesterday, so, what choice did I have but to do it?  I already had the shirt and all the goodies that go along with it... but I don't feel right about wearing race shirts until AFTER I have run the race.  Weird I know.  I really feel like I need to earn them or something.  I know lots of people show up to races wearing the shirt, but I just can't. 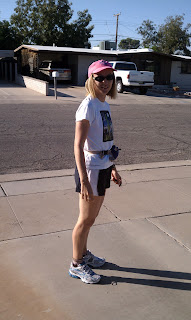 Here I am before I started.  I really wanted to get started earlier, but since it hasn't been over 100ºF lately (it was only (!) 94ºF yesterday) I decided to play with fate and start at the late hour of 8:45am.  It was fine.  Like 75ºF fine.  I just was feeling lazy through the whole darn thing.  I think there is a reason that I get up and run first thing in the morning.  I get lazier as the day goes on.  And slower.  Maybe I should have found someone to go with me, but I was SO slowwwww yesterday as well.  I couldn't make myself pick up the pace until over half way through (thank you Pink!), but by then how much time could I make up in the last two miles?  Not a lot. 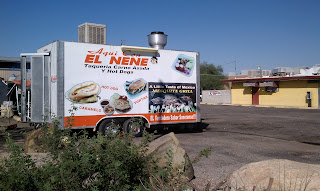 Of course, I was supposed to be documenting what I saw on my run, but since my time was so turtle-like, I decided not to take pictures unless I had to stop....which was at this traffic light.  I have never eaten at this Sonoran hot dog place, but I know lots of people who have.  Rachel Ray even featured it in her magazine as the best hot dog stand in the southwest.  It's totally NOT on my current unprocessed October eating challenge right now, but every time I stop at this light, the smell is heavenly.  It must be the carne asada cooking on the grill.  It's a good thing I don't run with money or I would be over there buying something.  And what's even stranger, is that I get home and never give it another thought.  Which is probably the reason I've never eaten there. 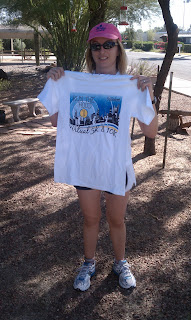