As much as I would love to give you a mile by mile review of my half marathon, my memories of it are more of just the highlights...

First, it was 50 degrees to start... do you know how rare this is in Tucson, AZ in October?  For whatever reason, there was a mini "cool snap" on Thursday, and it carried over a couple of days.  Don't worry.  It's supposed to be 90s again this week.  Needless to say, I got downtown, found a great parking place, and stayed in my car until I had to get out because I didn't want to get cold waiting for the start.  Wimp.  Yes, I am.  That and I didn't have anyone with me to carry any jackets for me.  My cute husband decided to go off on his bi-annual rock climbing trip and my kids, well, what do you think a 14 year old and a 16 year old would do with 2 hours, give or take, to kill while being downtown,

Just as the sun came over the horizon, we were off.  It was seriously the Most.Perfect.Running.Temperature. Ever.  Mile 3 was where the climb up A Mountain began.  I can't imagine doing this without ever having run it.  Or at least some other really long hills.  I don't know if it was the excitement of the moment, but I don't remember having any problem getting up this hill.  Before I knew it, I was at the top.  And waved at the photographer!  And, yes, I just ordered a photo of this moment.  Since no one else was there to document anything, I thought I needed a dorky photo of me arriving at the top of the mountain.

The rest of the run I spent trying to figure out what time I should be at.  I had no idea that doing math in my head would be so hard while I'm running.  It would take me almost the entire mile to figure out what pace I was at and calculate what time my watch should read by the next mile.  And it was only multiples of nine.  Something I'm normally pretty good at.  It made the miles go by really quickly though!  I was amazed that at each mile marker how fast (for me) I was going and realize how far ahead of my targeted time I was.  The first few miles I wondered if I was going too fast, but then I just decided that I felt good and to go with it.

I got to Mile 11 and got a horrible stitch in my side.  I know that there's a trick out there for getting rid of them, something about breathing, but since I can't remember the last time I got a stitch, I couldn't remember the trick either since I hadn't practiced it.  It seemed that this Monster Stitch kept moving across my abdomen.  I know my form fell to pieces at this point and I'm pretty sure I slowed down a lot because a whole bunch of people passed me.  Luckily, the sign for Mile 13 was right there.  As I rounded the corner and could see the timer and realized I might even make it under 1:50....  I ran under the timer at 1:50:01.  A twelve minute improvement off of my half marathon time 3.5 years ago.  A very happy camper.

I stopped, the stitch left immediately, and I walked around a bit.  I talked to a few people that had been running near me.  I ate a bag of Goldfish (I know, it's not on the diet, but they didn't have a lot of other choices.. should I have picked the Oreos instead?  No, there weren't oranges and bagels.).  I picked up my prize for running all three races in the Gabe Zimmerman Triple Crown.  Here's what I came home with: 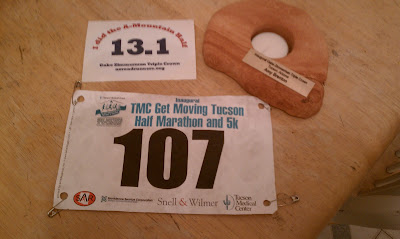 I think the sandstone candle holder is kind of cool to commemorate the Triple Crown of races - and I really like the 13.1 decal, though I don't know where I will stick it at this point, if anywhere.
I went home and took a nap.  The kids were up by now, and I told them I was going to sleep for a couple of hours.  What did they do?  Made sure I woke up by burning making toast underneath the smoke detector.  Sometimes I think they are as bad as three year olds.
I feel pretty OK today.  I can tell I've run.  A lot.  But it's not horrible.  A little sore, but no real complaints.  I've certainly been a lot worse after a race (thinking back to the first 10K I ever ran and wondering if I had crippled myself for life - I really could not take a step for days without limping).
And imagine how good a half marathon would be for me without a giant hill in the middle of it.  I'm almost tempted to think about it.
Posted by Amy at 8:47 PM