Run in the cold?

It got cold here last week.  Really cold.  I know 18ºF isn't very cold on the thermometer for most people, but for us desert rats it is!  In fact, most people around here have water pipes running on the outsides of their houses.  Last week that all changed when we got colder than it had been since 1933.  So many water pipes burst around here that every plumber's dream summer vacation is now funded.  The school I work at had rainy day schedule because the kids just don't have that kind of winter clothing.  The kids were so confused because it was bright and sunny outside.

I just couldn't force myself out the door for a 4:30am run.  I just don't own that many clothes.  And even if I did, what would I do with my face?  These are things I never had thought of before.  I can go as low as about 28ºF, but I think after that, I'm not sure how to act!

Husband and I jumped ship and went to La Jolla, CA instead.  It was actually a planned anniversary trip, but it came at exactly the right time.  So I made up all of those missed miles of not running in the dark and cold.  I decided that running in mild temps on a beach was much much better!

I really like how the picture of Husband turned out - the morning light was just beautiful! 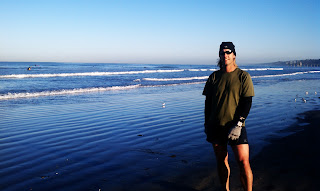 After too much eating, sleeping, kayaking, whale watching, and most importantly, ice cream eating, we had to come back to reality... luckily it had warmed up a bit... the forecasted temp for today was 80ºF!