Would you trust these kids to... 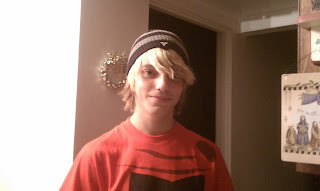 I mentioned how I would like to lose my muffin top for 2012.  Both kids ears perked up and suddenly they were arguing over who could give me the best ab workout.  Daughter has great abs - they do an ab workout everyday at her school dance class.  She also promised fun music would be part of it.  Son said that he does ab work at soccer practice everyday and he would make me look like the models on Shape magazine.  Daughter countered with her workout giving me the abs of the women on Runner's World magazine.

Well, um, I don't know.  Shape versus Runner's World.  I'd take either of their abs right now if you would give them to me.

Who got to go first?  Son.  I have a horrible time dragging getting him out of bed every morning, but with the promise of making his mom hurt, he was able to pop out of bed much faster.  What kid wouldn't jump at a chance like that?

And next time, I will try the Runner's World ab workout with fun music.

With all of this free help I will look awesome by month's end I'm sure.
Posted by Amy at 3:45 PM