If this isn't the strangest thing...

I ordered 2 new running bras back at the beginning of January.  I had been using the Moving Comfort Grace bra ... the kind that have a front zipper - because seriously - who wants to try and twist a sweaty piece of elastic over their head?  As convenient as that was, I never liked how the zipper didn't lie flat and made the front of my shirt bubble in all the wrong places.  Not that it matters much at 4:30am, but, occasionally when I make a daylight debut, it's nice to not draw *too* much attention to myself!

When Running Skirts emailed me with their one day Happy 2011 sale telling me about their $11 bras, I was sold!  I have one of their bras that I had gotten years ago.  In the world of running bras it's a fairly light support bra, but it supports me enough to get the job done and doesn't act like a wet rubber band when you are done with running.  I placed an order for 2 immediately.  Imagine my dismay when I got them and they were... padded.  I put one on and felt like a 12 year old trying to stuff her mother's bra.  I felt stupid, but decided to run in them anyway because it would cost more to ship them back than they were worth.  It's not like it didn't fit or something!  As I mentioned before, it's just mostly me and the newspaper guy, and he can't see a lot since it's pitch black out, so, I decided just not to think about it.  Until I washed it.  Then I got a huge laugh out of the situation... 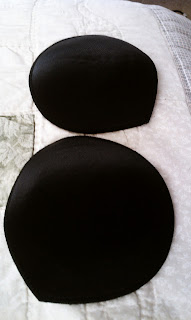 These are what was in the bottom of the washer with my running bra.  Two huge shoulder pad looking hunks of fabric and padding.  And the bra?  Now it looks just like my original one.  It has "slots" to slide these things in and out of - but you would never know it they are so tiny - no wonder I didn't see them to begin with!  I am so grateful I don't have to go around looking like a Dolly Parton wannabe while running! 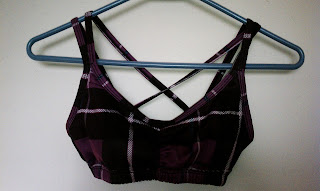