If this blog was my boyfriend...


He would be asking for his stuff back. Actually, he would have already asked for his stuff back. And I probably would have said "Oh yeah, I'll get to that" and not thought about it again until now when I finally get around to it and find out it's been so long that he really doesn't want his old sweatshirt and cds back. It's been so long that he's moved on to a new sweatshirt and likes different music now.

I guess that boyfriend didn't get what it was like to have a demanding full time job, 2 busy teenagers, 1 cute husband, 2 dogs, and 9 chickens. Oh, and throw in marathon training on top of that, and you have the perfect recipe for me to ignore my blog for, um, has it really been almost 3 months?

Marathon training? It's going great. My biggest challenge so far has been the making sure I not only run, but get in the cross training days. It takes up a lot of time and planning ahead has been essential. I even managed to go back to the rock climbing gym after not having gone for almost a year. Yes, another boyfriend ignored. So ignored I had to fill out a new waiver. Kind of embarrassing when this place is your cute husband's second home!

Tomorrow I'm up to running 10 miles. At the least likely to melt me to the sidewalk coolest part of the day... 5am. This is Tucson and it is June. If I had been smarter I would have chosen a February marathon. Then as my runs they got longer, they would have not involved carrying more water than my actual body weight. Ahh - the joys of desert living. Yes, I might be a tad jealous of those of you who run at noon, have rain on a regular basis, and grow something other than cactus in your front yards.


Thankfully, my cute husband made sure I was prepared for this running weather and bought me a hydration bladder to put in the vest I bought at the REI garage sale a couple of months ago. It had been barely used. Someone else must have decided that running in hot weather wasn't all that it was cracked up to be.

So dear blog, I hope to be more attentive in the coming months. This is the only way I will be able to remember what training for my first marathon was like when I'm 90 because I'm sure the heat will have melted my brain by then.
Posted by Amy at 7:23 AM 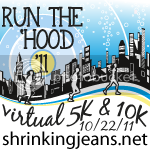